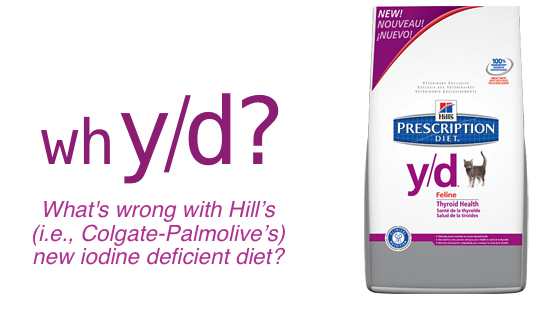 The multibillion dollar pet food industry has recently seen the addition of a new dietary therapy that promises to promote “thyroid health” in a can, or if you prefer, a bag. Despite the multimillion dollar advertising campaign waged by the Colgate-Palmolive subsidiary Hill’s Pet Nutrition that promotes an iodine deficient diet as a means of achieving “Thyroid Health”, thoughtful evaluation of their product yields serious concerns. To follow along as Dr. Peterson blogs about Hill’s y/d diet, click here.

The thyroid is a small bi-lobed gland located in the cervical region (i.e., neck) in all mammals. The thyroid gland gets its name from the adjacent thyroid cartilage, often referred to as the “Adam’s Apple”, which is the largest cartilage of the larynx or voice box. The thyroid cartilage resembles an ancient Greek army shield called a thyreos which, like the cartilage, also had a notch at the top for the soldier’s chin [1] (Figure 1). The thyroid is one of the body’s endocrine glands. Endocrine glands get their name from their behavior of secreting hormones into (i.e., “endo”) the blood stream. The hormones produced by the endocrine glands circulate within the bloodstream throughout the body to regulate various bodily functions.

Figure 1. Illustration of the human and feline cervical regions with emphasis on the thyroid gland, a
small bi-lobed gland located in the neck in all mammals that gets its name from the adjacent thyroid
cartilage. In cats the central isthmus that connects the two lobes is often vestigial resulting in the presence
of two anatomically independent lobes. 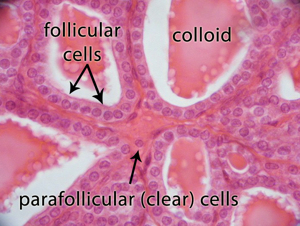 Figure 2. Microscopic image of the thyroid gland which reveals the spherical
arrangement of the normal thyroid follicular cells surrounding the proteinaceous fluid,
called the colloid that contains the precursor to the thyroid hormones T3 and T4 called
thyroglobulin. The parafollicular cells that produce calcitonin are also evident in this image. 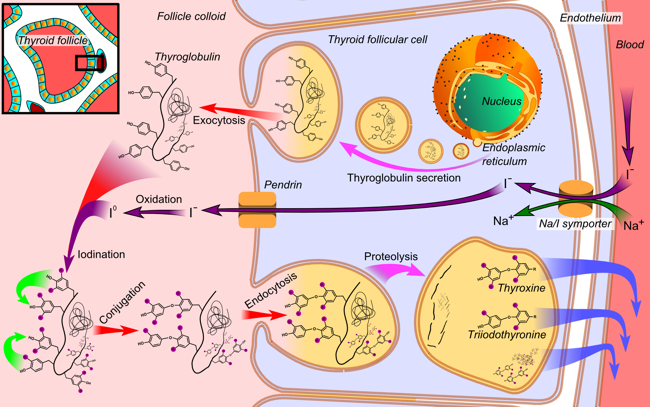 Figure 3. Illustration of a single thyroid follicular cell demonstrating the processes utilized to produce
thyroid hormone. Thyroglobulin is synthesized in the endoplasmic reticulum and follows the secretory pathway
to enter the colloid in the lumen of the thyroid follicle by exocytosis. Meanwhile, a sodium-iodide (Na/I) symporter
pumps iodide (I-) actively into the cell. This iodide enters the follicular lumen from the cytoplasm by the transporter pendrin,
in a passive manner. In the colloid, iodide (I-) is oxidized to iodine (I0) by an enzyme called thyroid peroxidase. Iodine (I0) is very
reactive and iodinates the thyroglobulin at tyrosyl residues in its protein chain. In conjugation, adjacent tyrosyl residues are paired together. The entire complex re-enters the follicular cell by endocytosis. Proteolysis by various proteases liberates thyroxine
and triiodothyronine molecules, which enters the blood. 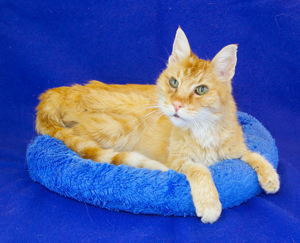 In cats, hyperthyroidism is almost always caused by one or more small benign tumors of the thyroid gland called adenomas [5]. These thyroid adenomas function autonomously and hence produce excessive amounts of thyroid hormones. The disease that causes hyperthyroidism in cats is similar to Plummer’s disease (named after the physician Dr. Henry S. Plummer) in people that is also caused by autonomously functioning thyroid adenoma(s)[6]. The clinical signs of hyperthyroidism are the same in all species and reflect the stimulatory nature of the thyroid hormones T3 & T4 on the cells of the rest of the body. Excessive thyroid hormone levels lead to an increased metabolic rate that if unchecked, ultimately proves life limiting. (Figure 4)

Feline hyperthyroidism is currently the most commonly diagnosed endocrine disease of the cat. Since its initial discovery in 1979, the diagnosis of hyperthyroidism in cats has continued to increase, reaching epidemic proportions. Our incomplete understanding of the cause or causes of hyperthyroidism in cats has precluded effective prevention efforts. Since its recognition in 1979, a major suspect of the cause for the thyroid adenomas that lead to hyperthyroidism in cats has been commercially produced cat foods. Despite the epidemic proportions that hyperthyroidism has reached in cats since the late 1970’s, little has been written about the nutritional needs of the hyperthyroid cat. With the introduction of Colgate-Palmolive’s (i.e., Hills’ Pet Nutrition, Inc.) iodine deficient diet y/d the question of what to feed a hyperthyroid cat has once again surfaced [7]. The concept behind Hills’ iodine deficient diet y/d is that a diet deficient in iodine content will limit the ability of the thyroid follicular cells to produce the thyroid hormones T3 and T4. Because the production of thyroid hormones requires the incorporation of iodine into the hormone precursor thyroglobulin, iodine deficiency will lead to the reduced production of thyroid hormones.

History of iodine deficiency in man 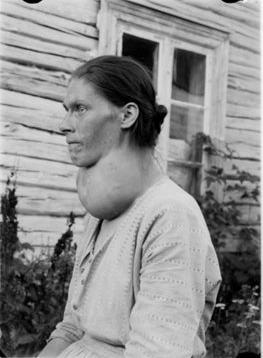 The effect of increased TSH production by the pituitary is stimulation of the thyroid cells to grow and produce thyroid hormones. The chronic increase in TSH levels in the blood that accompanies iodine deficiency ultimately leads to the hypertrophy of the normal thyroid gland causing a goiter (see figure above) [9].

Iodine deficiency is an important human health problem throughout much of the world. Most of the earth’s iodine is found in oceans, and iodine content in the soil varies with region. The older an exposed soil surface, the more likely the iodine has been leached away by erosion. Mountainous regions, such as the Himalayas, the Andes, and the Alps, and flooded river valleys, such as the Ganges, are among the most severely iodine-deficient areas in the world. One fifth of the world’s human population (1 billion people) have diets that are deficient in iodine. People in these areas commonly have thyroid enlargement (goiter), and often thyroid nodules as well. In the United States, dietary iodine deficiency was essentially eliminated early in the last century with the addition of iodine to salt and its presence in milk and bread products [8].

Potential role of iodine deficiency in the etiology of feline hyperthyroidism 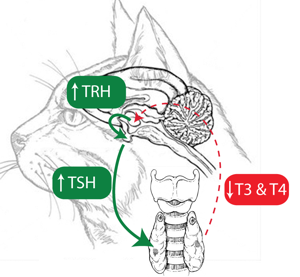 It is easy to understand how Hill’s new iodine deficient diet y/d works to lower the circulating thyroid hormone levels in hyperthyroid cats. By starving the follicular cells of the thyroid for the iodine they need to make the thyroid hormones T3 and T4, any iodine deficient diet will lower circulating levels of the these hormones. There are however, several questions about this diet that remain. 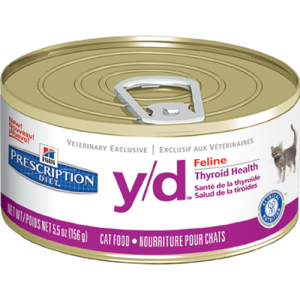 Is it safe to feed an iodine deficient diet to hyperthyroid cats?

What about feeding y/d to cats without pre-existing thyroid disease? Many hyperthyroid cats live in multi-cat households. According to Hill’s web site, “Because iodine intake from other food sources — treats, another pet’s food, etc. — can compromise the effectiveness of low-iodine nutrition, it’s critical that you follow your veterinarian’s feeding instructions carefully and feed only y/d” [26]. Consumption of even small amounts of foods containing higher levels of iodine, including essentially all commercially available cat and dog foods and many human foods will negate the effect of y/d. This may pose a real problem to most multi-cat households in which the pet food and water resources are shared. While publicly acknowledging the potential risks of feeding an iodine deficient diet to cats without established thyroid disease, privately Hill’s representatives encourage veterinarians to recommend feeding y/d to all of the cats in multi-cat households as a means of overcoming this problem. They argue that supplementing the cats without hyperthyroidism with small amounts of other foods will overcome the deficiencies of the y/d product. In light of our current knowledge of pervasive iodine deficiencies in many commercially available cat foods, this logic seems flawed. Feeding y/d to every cat in a multi-cat household, just to ensure severe iodine deficiency in a single hyperthyroid cat seems sure to accomplish only one goal, namely increasing the sale of y/d.

In addition to the issues created by feeding an iodine deficient diet, Hill’s y/d has many other features that make it a poor choice for feeding cats as a species. Cats are after all obligate carnivores and Hill’s y/d is relatively low in protein, high in carbohydrates and relies on large quantities of plant based proteins, all of which make it a poor choice to feed to any cat [7, 27, 28]. The dry variety of y/d utilizes the cheap by-product filler “soybean mill run”. Soy has been shown to contain enzyme inhibitors that impeded normal protein digestion and soy is a known goitrogen suspected as a contributing factor in the development of hyperthyroidism in cats[18, 29-34].

According to data provided by Hill’s Pet Nutrition, about 75% of hyperthyroid cats exclusively eating y/d will have normal serum total T4 concentrations by 4 weeks on the diet. By 8 weeks, 90% of cats have a serum T4 level; by 12 weeks, almost all cats should have values within the reference range [26].

It is well established, however, that geriatric cats normally have total T4 levels in the lower half of the reference range that was utilized in Hill’s studies [35]. In Hill’s own studies, hyperthyroid cats fed exclusively y/d did not routinely achieve these levels, even after 12 weeks on the diet. Preliminary evaluation suggests that this therapy appears to be more effective in cats with mild to moderate elevations of T4 and is not as effective in cats with severe hyperthyroidism. Furthermore, as an iodine deficient diet does not prevent, and may even encourage growth of the thyroid adenomas responsible for hyperthyroidism in cats, use of an iodine deficient diet appears unlikely to successfully control the thyroid hormone elevations over time. 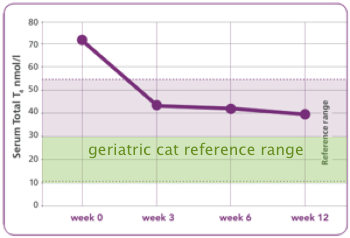 As the thyroid adenoma(s) responsible for hyperthyroidism continue to grow, the number of autonomously functional thyroid cells increases and their combined efficiency for extracting iodine from the blood stream with which to make thyroid hormones increases.

There is little doubt that feeding Hill’s new iodine deficient diet y/d has the potential to lower circulating thyroid hormone levels in hyperthyroid cats. The real question is whether a severely iodine deficient diet is the way to achieve “Thyroid Health” as suggested by the recent Hill’s marketing blitz. With what we know about the potential causes of hyperthyroidism in cats combined with the basic nutritional needs of the feline species it appears that a low protein, high carbohydrate, plant based, iodine deficient cat food is the epitome of what some have called “tunnel vision” nutrition. Indeed the more I learn about the new diet from Hill’s Pet Nutrition the more I find myself asking the question…

To learn more about feline nutrition and the effectiveness of Hill’s y/d diet, and to follow along as Dr. Peterson researches this topic and posts to his blog, click here.

5. Peterson M.E. and Becker D.V. Spontaneous Hyperthyroidism in the Cat: An Animal Model for Toxic Nodular Goiter in Scientific Proceedings Proceedings of the 59th Annual Meeting of the American Thyroid Association. 1983: p. T-31.

28. Peterson M.E. Is the Protein Content of Hill’s Y/D Too Low to Restore and Maintain Muscle Mass in Cats with Hyperthyroidism? Insights into Veterinary Endocrinology 2011.